Out and About – Our House The Madness Musical

Odyssey Theatrical Productions presented their latest production. Our House is the award winning musical featuring the incredible music of Madness.

Our House revolves around teenager Joe Casey. In a bid to impress his new girlfriend Sarah on his sixteenth birthday, Joe illegally breaks into a housing development. Eventually the police come looking and Joe must decide to take either the criminal route his father took (that eventually lead to his death), or whether he gives himself up and lives as a decent man should. As the story unfolds, we see two very different lives of Joe Casey and the consequences of the actions he took that night.

It was worth going to see this marvellous presentation by local talent, choreography; it’s slick, bold, and thoroughly makes you want to get up and join in with the big numbers.

After the musical, Station Manager, Stewart Green caught up with Alex and Kim Nicholls (Joe and Kath Casey) and Esther Mead (Sarah) to pass on our thanks to the cast for their wonderful performance. 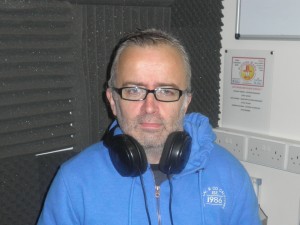